The BEST of Ireland Golf Trip 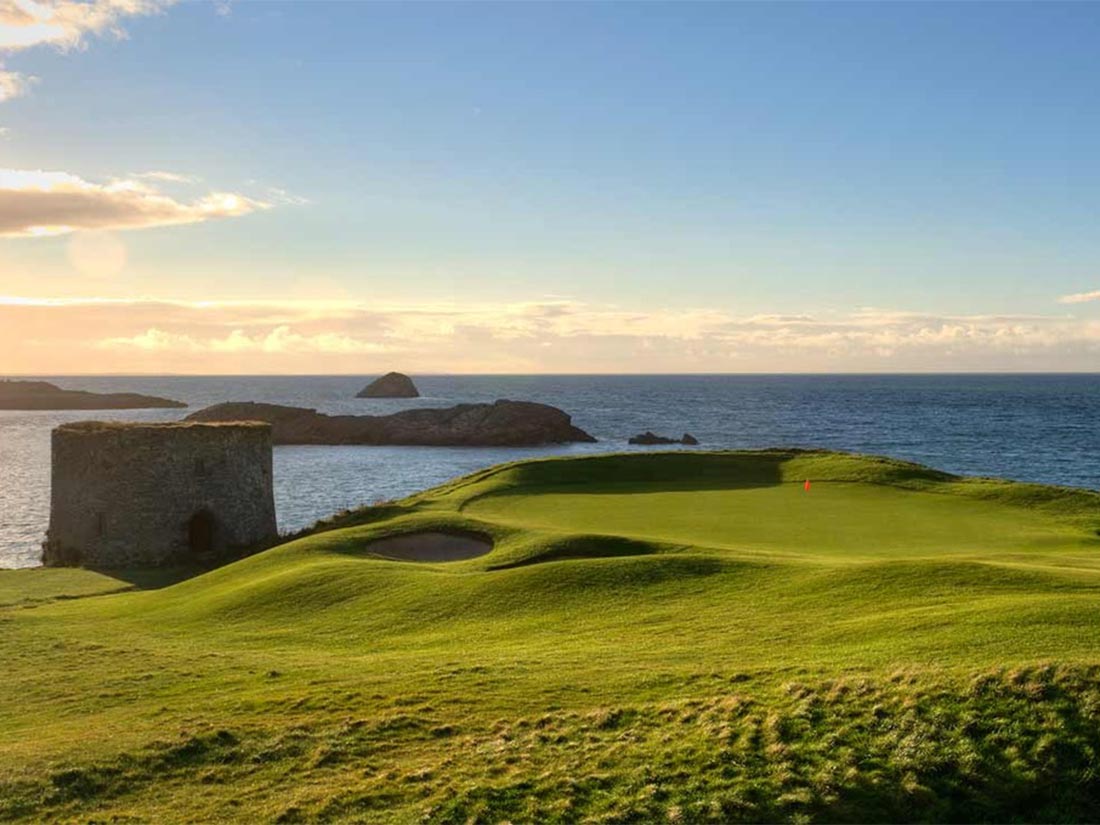 The BEST of Ireland Golf Trip

Almost every golfer has Ireland at the top of their list for a place to visit and a place to golf. It’s not all fish and chips in Ireland, it’s where life long memories are made and to prove that we have developed the “Best of Ireland Golf Tour” for 2018. A remarkable tour with VIP service and experiences throughout offering 5 of the most challenging and sometimes daunting courses to play. Everything in Ireland has a story whether it’s true or “Blarney” and the story behind these courses are no different.

The Island Golf Course just outside of Dublin was founded in 1890 as a private group of 10 men ominously calling themselves the “Syndicate!” Upset with other regional courses who forbade golfing on Sundays, the Syndicate leased land on an island (hence the name) accessible only by boat. Times have changed and the island became attached to the mainland, but it’s still surrounded by water of three sides and commanding views of Dublin in the distance. The course is rather straight forward with very little changes from it’s original terrain and very few bunkers, however the course is surrounded by sand dunes as well as golf ball swallowing tall sea grass. Mother Nature has a tendency to give you a little wind to consider as well.

The Island was your warm up and now it’s time to play big. Royal Portrush built in 1889 is currently the Number 1 golf course in the world. Common words describing the course are “Blind, Brute, with lots and lots of Rough.” The views from the course are stunning and an easy distraction between swings. In describing the course, Rory McIlroy said “the views from the tee on the 4th are my favorite in all the world and the yellow-brick-road-like meandering and backdrop that define the 9th are equaling draw dropping”. Almost 7200 yards total from the championship tees, the course is a cornucopia of hills, thick rough, even thicker rough, water, bottomless traps and greens that can test every amateur or pro.

Royal Portstewart founded in 1891 is entirely dictated by club selection as a result of dramatic elevation changes throughout. The course wastes no time getting in your mind as the 1st hole is an intimidating downhill 425 yard par four. The course is truly breathtaking with giant sand dunes and stunning views of the Atlantic and the Inishowen Peninsula. In 2017 the course played host to the Irish Open. The course is most famous for the “Thirsty Hollow” – a mixture of 7 holes built entirely over the sand dunes of the North Atlantic and part of the Strand Championship course at Royal Portstewart.

MY FAVORITE PLACE TO PLAY GOLF IS IN IRELAND. IT’S THE MOST BEAUTIFUL COUNTRY TO PLAY GOLF IN. AND WHEN YOU COME AS A GUEST, YOU’RE TREATED LIKE A KING.

Buckle up – It’s time to play Royal County Down – the Number 1 rated Golf course in the world and the home course for Rory McIlroy. Built in 1889 the front 9 has been described as the best 9 holes ever played in the world. In the shadow of Slieve Donard (the Mountain, not the Hotel), the course is formidable. The 4th hole is intimidating – a simple par 3 – a 200 yard shot over prickly course grass. If your ball goes in, take a drop because it won’t be found. The white painted rocks for aim will be your friend on the blind shots, just choose the correct club!

Portmarnock – Back to Dublin for your last championship course. Portmarnock was built in 1894 when the dress code required a suit and tie! Bring your A game for putting, the course is a true links course that follows the contour of the coast line with thick grass, challenging blinds, and a favorite for golfers with a draw. The course was originally owned by distiller John Jameson (pause for silence) around 1850 as a private golf course. The course is surrounded by water on 3 sides, has deep pot bunkers and has been the go to for the Irish Open numerous times. Snead and Palmer were among the courses greatest enthusiasts.

Ireland is truly an experience to be held by all. Beyond all of the experiences to be had from golf, natural landscape, monuments, pubs, music and more, nothing is more endearing than the people of Ireland who welcome everyone with open arms. If you ask a local for a great place to grab a pint, expect a 5 minute conversation if it’s quick and you just might learn a thing or two. Up until the year 2000 before Ireland joined the European Union, their currency was the “Punt” and the images on their currency were of famous Irish writers. So I leave you with a quote from Irish writer and legend, James Joyce, “I wanted real adventure to happen to myself. But real adventures, I reflected, do not happen to people who remain at home: they must be sought abroad.”